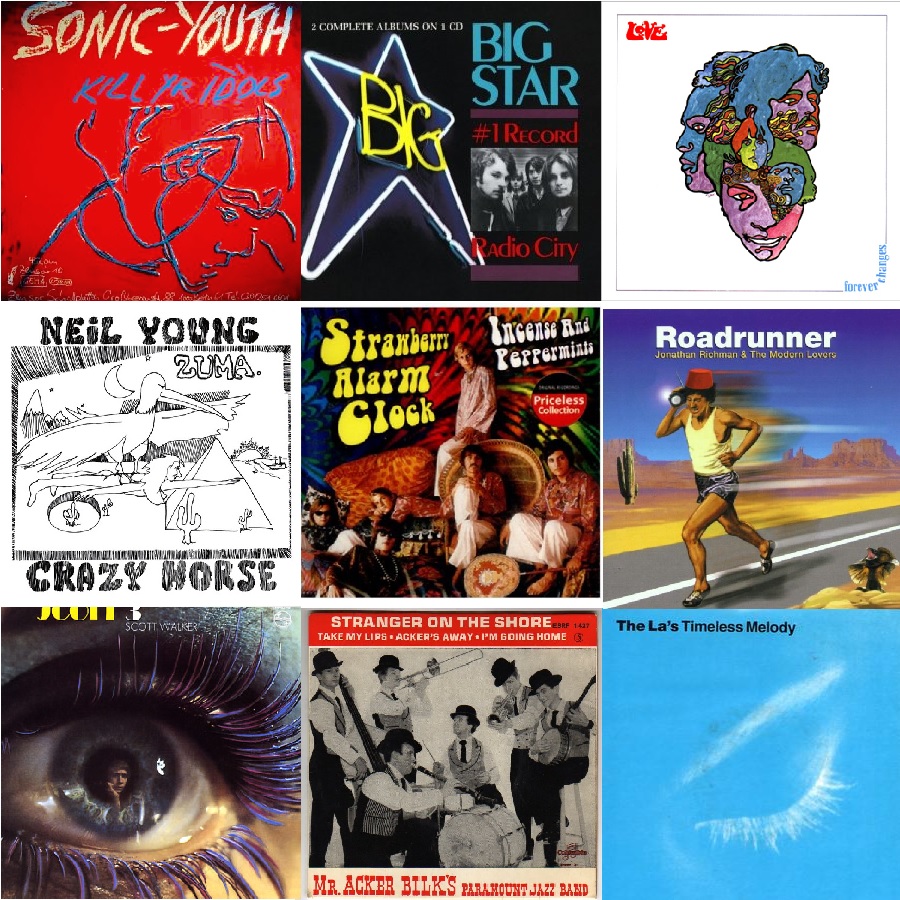 Listen to the playlist in Spotify here.

While you listen, here’s Fred to talk you through it, track by track.

Sonic Youth – Kill Yr Idols
Working at ULU we did Sonic Youth a couple of times early on, once supported by Big Stick and Live Skull – a truly legendary line-up. That period Sonic Youth was raw and uncompromising. The later records do have a kind of serene beauty (“Sugar Kane” etc), but the in-your-face de-tuned energy of the early records really had an impact on us, especially Tim, who was an unreserved Sonic Youth fan, a fact reflected in the number of (mainly unplayable) guitars he had on stage. The thing about TFC being Sonic Youth’s favourite UK band is a total lie, though Steve Shelley was at the Goldsmith’s Tavern when we supported Loop as he was brought along by Epic Soundtracks (who we knew from around). But Sonic Youth were definitely the Family Cat’s favourite American band.

Pussy Galore – Dick Johnson
I adapted the riff for Too Many Late Nights from this song, believe it or not, well it was my take on it. I saw Pussy Galore lots of times, including the infamous Mean Fiddler show in 1988 when they kept us waiting for an hour and a half, then finally came on and played a 30 second set. I had rare US copies of the very early records, but this one is on the “Dial M” album.

Big Star – I’m In Love With A Girl
Covered this acoustically with John and Tim in rehearsal, we also attempted “You and Your Sister”, but these are hard songs to do if your singer is neither Alex Chilton nor Chris Bell. The “other” TFC seemed to have the monopoly on Big Star love in the 1990s, so I guess we played it down, though we did cover (and release a single of) “Jesus Christ”. I last saw Big Star at the Shepherds Bush Empire a couple of years ago and it was wonderful. Alex Chilton was one of those people who found it too easy to be a rock star, and perhaps I just tried too hard, a subject I have tried to address recently in Jack Adaptor’s “Number 1 Record”.

Guy Clark – Desperados Waiting For A Train
Our manager Pete Lawton introduced me to all sorts of interesting country rock music: Guy Clark, Townes van Zandt, Jerry Jeff Walker, John Stewart, which led me to try to write songs in that mode (“Happy To Be Here” on the B-side of “Springing The Atom” is one, and was directly inspired by “Desperados Waiting For A Train”). I would have liked to have done more of that kind of stuff, though the Rockingbirds got there first. My first band after Family Cat, Pure Grain, with John Graves on Bass, was much closer to that spirit. I have a signed copy of the Guy Clark LP this song is on. I saw Guy play at the Union Chapel in the mid 90s and it was a wonderful show.

Love – Maybe The People
We all agreed about Love, as most sensible people do – it’s together and untogether at the same time. “Blood Orange” came from this. The vocal and guitar work together in places, which is quite Family Cat. John Graves probably introduced this because his Mum had a lot of cool LPs from the 60s and 70s – Laura Nyro, Fairport Convention and Todd Rundgren (though it was cooler to listen to Love in 1989).

Strawberry Alarm Clock – Incense and Peppermints
The very name The Family Cat came from the back of a Strawberry Alarm Clock LP (it was the name of the lighting company who did their live shows) spotted by Tim, who came up to me and said it to me as a potential name. I happened to be holding a blue plastic cat I had just got from a Christmas cracker and it seemed serendipititious at the time. Though we could have been called Paper Hat.

Jacques Loussier – Air On A G-String
John played it and we turned it into “Hamlet For Now”. There is incredible space in this music, now I actually come to listen to it. John really knew his stuff. He loves a mixture of incredibly cool music and was the King of Easy Listening a long time before it was hip in 1995. His record collection went from being worth 50p in 1990 to £30,000 at the height of the easy boom. It’s now back to 50p, much to John’s relief.

Acker Bilk – Stranger On The Shore
John used this as the intro to “Sandbag Your Heart”, thundering into the riff after. I can’t remember why, but it was funny at the time and we stuck with it.

Scott Walker – Copenhagen
I was quietly in love with Scott after my friend Orville played me “Scott 1” late one night after a night out at the Falcon in Camden. This led to a horribly misguided version of “Montague Terrace” which was put out as a free single with the “Furthest from The Sun” LP.

The La’s – Timeless Melody
Tim was the real La’s fan but I got it too – incredible songs. We saw them at The Marquee and it was a really memorable show. This is one of the great all time records, still sounds fresh today. This has a brilliant guitar solo.

Neil Young – Cortez The Killer
We played this song lots of times but only at in-store appearances. I still can’t decide if I like this or “Powderfinger” better, but “Cortez” is really emotional. “He went dancing across the water….”

Jonathan Richman – Roadrunner
I was in love with this song as much as Jonathan Richman was in love with Massachussetts! When I was 15 I heard “Roadrunner” on John Peel in the dark through the little earpiece I had and it was like hearing the sound of freedom. Next day after school I bought the single from Revolver Records in Southampton bus station. The sound of suburbia I recognised by being from suburbia and in love with America, the America I had never visited. “She Cracked” was a favourite of Jelbert and Tim and I think Kev’s favourite was “Hospital”.

Click here to listen to Part One of the playlist.