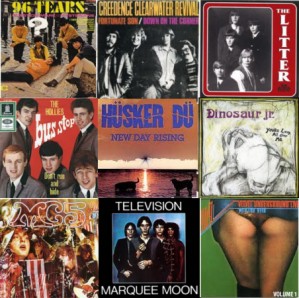 Fred, frontman of the Family Cat, has compiled a playlist exclusively for us at 3 Loop Music giving an insight into where The Family Cat sound came from. It’s too good not to share so click and listen to the tracks that influenced and informed the band and their music.

Listen to the playlist in Spotify here.

While you listen, here’s Fred to talk you through it, track by track.

Husker Du – New Day Rising
Jelbert and I saw Husker Du at the Electric Ballroom on 1986 or so, they played for what seemed like four hours, the crowd got thinner and thinner but we stuck it out. This track is the “overture” to the melodic, angry and maudlin masterpiece New Day Rising. I think Husker Du were really influential on the ideas Jelbert brought in for Cat songs.

Dinosaur Jr – Little Fury Things
Tim bought the “You’re Living All Over Me” LP and we played it to death in the summer of 1987 when Tim, Jelbert and John all lived in the same house in Finsbury Park. Classic Dinosaur Jr line-up, tight, loose and super-melodic. And the production is great too – noise and clarity at the same time, something we aimed for in the studio but never quite pulled off. Later in the band’s life I tried to echo the musical breakout section of this song for a Family Cat song (“Whaling Station”, now lost).

Velvet Underground – What Goes On
When Jelbert and I started to be friends we’d hang out in his bedsit in North Pole Road on Saturday afternoons and drink Wild Turkey bourbon and listen to Orange Juice and the Velvets. By the time Final Score came on we’d have done the Wild Turkey and listened to “Live 69” three times: amazing versions of the best songs, Sterling Morrison at his violently rhythmic best, Lou Reed sounding like he actually means the words, Mo Tucker putting down the beat like someone driving a steamroller across a rickety wooden bridge. There is a hypnotic, transcendent certainty in this song that says: this is perfection defined by its imperfections. If only we had realised that these were ace musicians, not beginners like us… would that have put us off? The relentless lack of a guitar solo should perhaps have told us something.

Television – Marquee Moon
One of my favourite songs of all time. Just to hear it takes me back to being 15. I bought the 12” single of “Marquee Moon” in Virgin Records in Southampton, along with the Pistols “God Save The Queen” and the first Jam LP, not a bad haul. Later I used to see Tom Verlaine in the launderette in Goldhawk Road where I lived for a while (moving along the Hammersmith and City line). I didn’t see Television live until Glastonbury in 1992, a Contrane-y set which went with the LP they released around then, and I recall being as excited about that as I was about the Family Cat set the next day. At the Royal Festival Hall a few years back they did older material and Tom Verlaine put so much vibrato in the left hand during the solo to “Marquee Moon” he had to keep taking his hand off the strings to shake the cramps out. I stole the hook from a song from Tom’s Dreamtime solo LP for the outro to our “Tom Verlaine”.

Creedence Clearwater Revival – Fortunate Son
We covered this on Tim’s suggestion, he loved Creedence, especially the photo of John Fogerty inside the live LP, where he’s wearing a checked shirt and has his arms outstretched in front of thousands of adoring fans. CCR had many hits but seem somehow to fall outside pop history, perhaps because of how they sound, perhaps because they were Boston boys pretending to be from the bayou… The Family Cat live version was a struggle for me as I couldn’t really sing it.

Question Mark and the Mysterians – 96 Tears
We played this live a lot in the early days, mostly as an encore. I think John introduced the idea of covering it, and actually it’s quite TFC in that the drive comes from the bass line. It gave me the chance to take the mic and show off, something I was (am) very bad at. The middle eight is weird, almost undeliverable. The Stranglers covered it too, and when we found out, we stopped.

The Litter – Action Woman
We were all really into Nuggets in the mid-eighties, plus another series of vinyl LPs on a German label I can’t remember the name of. This song was on one of the volumes of the latter and we covered it really early on in rehearsals, way before we had the chops to do garage rock properly. People think it’s easy, but you have to remember that the American local bands that did those garage/pysch/beat records in the 60s were usually good, live-show hardened musicians who just chanced upon cheap studios and made singles. And this is a stone-cold classic example!

Hollies – Bus Stop
We recorded a version of this for Imaginary Records, but I don’t remember ever playing it live. Tim loved this and introduced it. Bus Stop has the classic Hollies mix of prosaic, mundane lyrics and sweeping, arching melody lines and close harmonies. Deceptively hard to sing. Carousel is probably an even better song.

MC5 – Kick Out The Jams
The greatest rock intro ever. When I first met Fraser in the shop we worked in I put on an MC5 LP to impress him with my rock credentials. It worked. John Graves and I played the whole of the live LP on a drive from Calais to Dijon recently at deafening volume and it made us feel very good indeed. The root of many Family Cat songs, from Wonderful Excuse to Move Over I’ll Drive… But oh to have had the voice (and political awareness) of Rob Tyner. Saw a reformed MC5 in London a couple of year ago and my hair stood on end.

Small Faces – Afterglow (Of Your Love)
Tim and I once argued for hours with Dedicated’s Doug D’Arcy in a Paris restaurant about who was better, the Kinks or the Small Faces. Doug was for the Kinks, and I guess he had a point having lived through the period, and also I now think the “Village Green” album is as close to a perfect record as you can get. But the Small Faces were often cool and tuneful and heavy, everything the later version of The Family Cat wanted to be. (Only they had Plonk and Steve Marriott). We were once amazed by Terry Staunton’s ability to play Small Faces covers on an acoustic guitar at a hotel in Liverpool after a Cat show. An NME hack a better musician than the band? Could it be? It be.

Camper Van Beethoven – (We’re A) Bad Trip
We went on a band outing to Dingwalls to see them and it was an amazing gig. They could PLAY. This song is from the “CVB III” LP and was a band favourite. “Went to your party, drank all your beer, we’re a bad trip”: a bit like we perceived ourselves as a band… Great musical section after the second chorus, cheesy, woozy organ and harmonizing guitars. The bass player was cool. David Lowery went on to do Cracker, and those records are brilliant too.

Orange Juice – Tenterhook
Another group that Jelbert and I initially bonded over. I had bought all the early singles and the debut LP in Southampton and saw the band as a part of a new kind of future. I got the Rip It Up LP at HMV where Jelbert and I worked for a spell in 1986/7, before I went to live in France in a last ditch attempt to not become a failed indie-rocker. But you can’t beat destiny. This is such a beautiful love song, Edwyn Collins’ mannered voice is cloaked with emotion. The ending and the coda gets me every time, and reminds me of an HMV Christmas party where I decided to love one girl rather than another.

Primal Scream – Velocity Girl
Before the onset of pomposity, Primal Scream wrote some great songs and this one, a Kev Downing favourite, is short and succinct. In 1986 people aspired to this. I stole the atmosphere of this song for “Place With A Name” and some of the other early Cat pop songs.