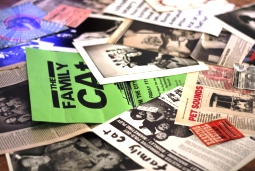 Sonic Youth once claimed that The Family Cat were their favourite UK rock band, so it’s about time that there was a collection of their finest tracks.

Five Lives Left: The Anthology has been compiled by Paul Frederick (aka Fred) and John Graves. The 2CD set tracks the band’s career from the first single, Tom Verlaine, on Bad Girl Records through to previously unreleased tracks from the abandoned post-Magic Happens sessions.

Fred said “We chose all the singles and some alternative versions of a lot of the LP tracks, plus unreleased songs from the sessions which would have become the third full LP if the band had carried on after Magic Happens. It’s strange to listen to this music after so many years, but it’s good to hear that unique mixture of power-pop, pyschedelic grooves and heads down, no nonsense, guitar grinding!”

And John added “For me, this brings back a world when Snooker was popular, bands had to starve for their art, and CDs were quite a novelty. Looks like in 2012 we have come full circle.”

The 36 track set includes all the singles including the classic Steamroller, plus Colour Me Grey and River Of Diamonds featuring PJ Harvey on backing vocals. There are also 10 previously unreleased recordings featuring BBC sessions, key album tracks and b-sides.

You can pre-order the album here.

Register with 3loopmusic.com to receive regular updates of news, information and exclusive content from the 3 Range.