We are extremely proud to announce that Kitchens of Distinction will release their new album, Folly, through 3 Loop Music on Monday September 30th 2013.

The 10-track album is the band’s first in 19 years following the release of Cowboys And Aliens in 1994. 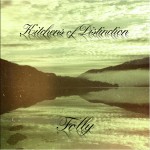 The tracklisting of the album is as follows:

Patrick Fitzgerald explains the gestation of the album:

“These songs came together over a two-year period which began in June 2011 and finished during April 2013. As with all songs by Kitchens of Distinction, new and old, they began with the musical structure first, the tune and lyrics coming later. With these songs I wrote the initial music, with KOD guitarist Julian Swales shaping them, suggesting tempo changes, structure changes, and providing the trademark sonic embellishments of his galactic guitar cascades. Dan Goodwin, original KOD drummer, added percussion and rhythm programming support. They were recorded in my studio in Derbyshire and at Julian’s studio in Brighton. The songs were mixed with Pascal Gabriel in April 2013 when I was recovering from a nephrectomy and winter would not leave us.”

Folly is available in our shop on CD, LP, download and in a very special bundle.

The bundle, with your choice of CD or LP, includes an organic cotton Folly t-shirt with lyric backprint, plus a special handmade, illustrated lyric book in a Pistachio green leather-effect card cover, bound with silver thread. The book is numbered and the first 200 copies will be signed by Patrick.