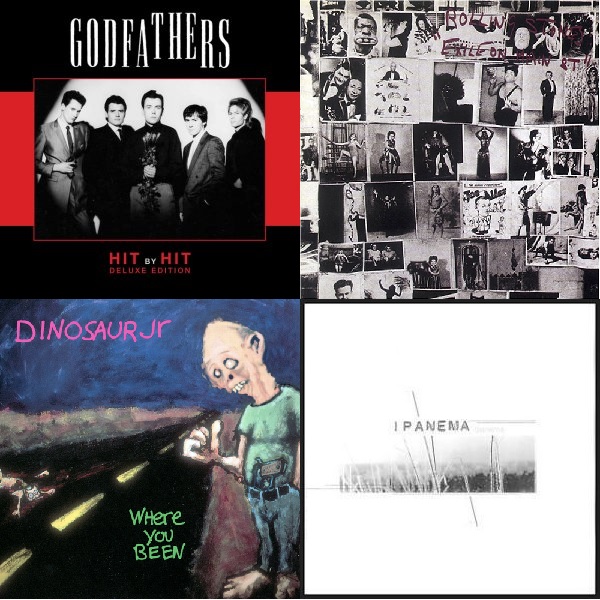 He chose to give us a run through of his favourite tracks from then and now. It’s an absorbing listen and here’s Chris to take you through his choices and reveal his favourite tour van tracks, the most emotional track he’s ever heard and a surprising but begrudging admiration for Christina Aguilera!!

THESE ARE SOME OF THE SONGS THAT I LOVED BACK THEN:
TANK – I FELL IN LOVE WITH A STORMTROOPER (from the album “The Filth Hounds Of Hades”).
This isn’t on Spotify but here it is on Youtube.
Even before I was in the band we all used to congregate on a Friday and Saturday night at a club called “The Agincourt” in Camberley, near where we lived. (It’s still there but not the same). Whenever this song came on all of us and our mates used to rush to the dancefloor and headbang to this track (even Wiz). It was awesome. I was a big fan of The Damned and Motorhead anyway so when this album came out I was in rock heaven. Algy Ward, god bless him.

THE GODFATHERS – I WANT EVERYTHING (from the album “Hit By Hit”)
We used to listen to this album every time we got in the van to go to a gig in the early days. The lead guitar intro was like nothing we’d heard before and was mind blowing. On the way back from gigs it sent us mental. We would play this album and take turns to hang out of the side of the van (like, right out whilst we would be held by our ankles) and try to drink a beer and smoke a fag whilst someone would drunkenly hang on to us as we sped along the M4. We called it “the dangle.” It got worse with us performing the “sumo dangle” but that’s another album!! This record was a massive influence on us and we loved it so much that we did cover the song “I’m Unsatisfied” at a few early gigs, (like the Marquee in Wardour Street). I’ve heard they’re still playing. Gotta see them again to relive that sound. Genius.

THE ROLLING STONES – TUMBLING DICE (from the album “Exile On Main Street”)
Everything on this album really moved me, but mainly “Tumbling Dice”, “All Down The Line” and “Shine A Light”. I agree that they didn’t always make great albums, but there’s something special about pi**ing off to France with all your mates and recording an album in your Khazi, or basement or kitchen or whatever, getting all of your gear nicked in the process, and still coming out with a record that has more soul then anything I have ever heard before. Whatever was going on around them at the time didn’t matter. That record was gonna be good whatever happened.

THE REPLACEMENTS – HERE COMES A REGULAR (from the album “Tim”)
We played this album to death on tour, and to be fair some of it wasn’t great but this one song is special. Gotta love a bit of drinkers misery when you’re feeling a bit down, we’ve all been there. But Westerberg had it off the scale. Listen to this song and just imagine being there in the bar with him at the time. Isn’t that what makes a great song? But this was like Cheers meets Withnail and I. “I’ll take a great gig whisky to ya anyway”. Cheers Paul.

AFGHAN WHIGS – TONIGHT (from the album “Congregation”)
I just bumped into this band along the way. I was given a free album by our publicist at the time. They were hailed to be the next best thing from the Sub Pop label after Nirvana and Mudhoney but most people brushed them aside. I loved them and this track in particular. Great players with soul and feeling. Also still going I believe. Great album.

DINOSAUR JR – OUT THERE (from the album “Where You Been”)
I’ve seen a lot of good guitar players in my time, but this guy, wow! What a legend. The lead guitar playing on this song was ridiculous. Me and Wiz went to see the band at Brixton Academy when we were recording Magic Bullets and we stood there like a couple of statues for the whole gig in amazement. When the band had finished we went up to the front of the stage to try and work out how Mascis came up with that massive sound. He had about six normal black Marshall amps, regular rock stuff, then there was a crafty white one that we’d never seen before, and then there was this green mothefu**er on its side like some kind of an alien intruder. Man, that guy knows his stuff.

THE LEMONHEADS – RIDE WITH ME (from the album “Lovey”)
By far the most emotional song that I have ever heard, but I have no idea what it’s about! Probably drugs knowing Evan. I just remember playing the hell out of this record and always trying to play all of the songs on the guitar when I was drunk. Hopeless!! But it will never leave me.

THE POSIES – DREAM ALL DAY (from the album “Frosting On The Beater”)
This band came out of nowhere and had a great sound. Sometimes we would play this album whilst waiting to go on. Really gets you in the mood for rock! “Dream All Day” is the first track with a wicked guitar intro. Great drummer too. And the last track on the album is awesome also.

AMIEE MANN – I SHOULD’VE KNOWN
Nothing to say about this song really other than “I loved it”. Never liked anything else that she did but this one just grabbed me and I played it to death back in the day. Great pop song.

SMASHING PUMPKINS – 1979 (from the album “Melancholy And The Infinite Sadness”)
I heard this song for the first time in a taxi with the band on Sunset Boulevard going to an interview with the legendary Rodney Bingenheimer at KROQ, the Los Angeles radio station. (This was the interview where we took the piss out of the Manic Street Preachers). I liked the band anyway but this was the first time I’d heard anything from this mega double album. I’ve loved the band ever since.

AND NOW…
NEIL YOUNG – INTO THE BLACK (from the album “Rust Never Sleeps”)
I used to be in a band called Loose Kaboose years ago. The singer made me a tape of an album by Ted Nugent ‘cos he thought I might like it! On the end of the tape was this song. Fucking hell, what a sound. This was grunge way before Sub Pop. He invented it. Went on to make a few other decent records too!!

WARREN ZEVON – DESPERADOS UNDER THE EAVES – (from the album “Warren Zevon”)
My band recently did a tribute gig to celebrate the life of Warren Zevon after 10 years since his death. I trawled through all of his albums to find the best songs for the gig but this one stood out as the best. It’s a sad indictment of a hugely talented man with serious personal issues but that was his life basically. A beautiful song.

BOCELLI – TIME TO SAY GOODBYE
I first heard this song on a visit to Las Vegas. It was being played outside The Mandalay Bay hotel accompanying a huge water fountain display. It stuck in my mind and then it re-emerged on many episodes of The Sopranos. A big fat bloke also sang it at half time during a game I went to at Reading football club a few years ago. Don’t think that lot really appreciated what they were witnessing though! Really special.

CHRISTINA AGUILERA – BEAUTIFUL
I fu**ing hate Christina Aguilera but I so wish I had written this song. I apply a test to any song – “How good would this song be if John Lennon had sung it” – I would love to have heard that. This song would have passed the test.

DOVES – CATCH THE SUN
I first heard this song on a compilation album called “The Album”. Genius! It included such horrors as Coldplay, The Divine Comedy and David Gray. The beginning of this song sounds like Swervedriver (a band that I also loved) but has a fantastic chorus that just grabs you and makes you feel happy.

JET – LOOK WHAT YOU’VE DONE (from the album “Get Born”)
Donkeys years ago MC4 played a gig with The UK Subs. God knows where it was and it was never to be repeated, but that night the UK Subs singer, Charlie Harper, said that he had a dream the night before that MC4 were the new Beatles! A compliment I guess, but that’s how I feel about this band. This is a song that could have been written by The Beatles if they were still going. I just love it.

THE SNAKES – THE BAND PLAYED ON (from the album “The Last Days Of Rock n Roll”)
I’ve been a fan of this band since they began about 10 years ago and had the privilege of becoming the drummer in 2012. I had to learn all of this album in a hurry and realised that at the time nobody had heard any of the tracks. It is the best album they have done and one of my favourite of all time. “The Band Played On” is a tribute to Dan Tilbury’s fantastic drumming. This song was essentially written and recorded in the studio in no time at all and the outcome is fantastic. Long may it continue.

GENE CLARK – SOME MISUNDERSTANDING (from the album “No Other”)
As a former member of The Byrds, Gene Clark went on to make many albums and many bands have covered his songs, but this is a beauty. Just quality song writing and beautiful melodies. Just what you want from an album really.

ROCKET FROM THE CRYPT – ON A ROPE (from the album “Scream Dracula Scream”)
Never did get to see this band but love this album. “On a Rope” has the best guitar riff. Real air guitar stuff.

IPANEMA – MISERY AND VOMIT/IS IT RAINING OUTSIDE (from the album “Ipanema”)
This band were by far and away better than anything that Mega City Four did. To be honest I could see where Wiz was going when we recorded “Soulscraper” and I wish I could have been part of it. But Lawrence was far better than me. I can’t decide between these two songs, both classic Wiz vocally, but the guitar playing was up there with the best. Never got to see them, gutted.

A fantastic listen – thanks Chris!