Our very own Geoff Loop caught up with Carl Flint, artist and illustrator for such august publications as the NME, the Guardian and Select to talk about Carl’s career, and the Sugababes (visit our Art Gallery here for examples of Carl’s work). 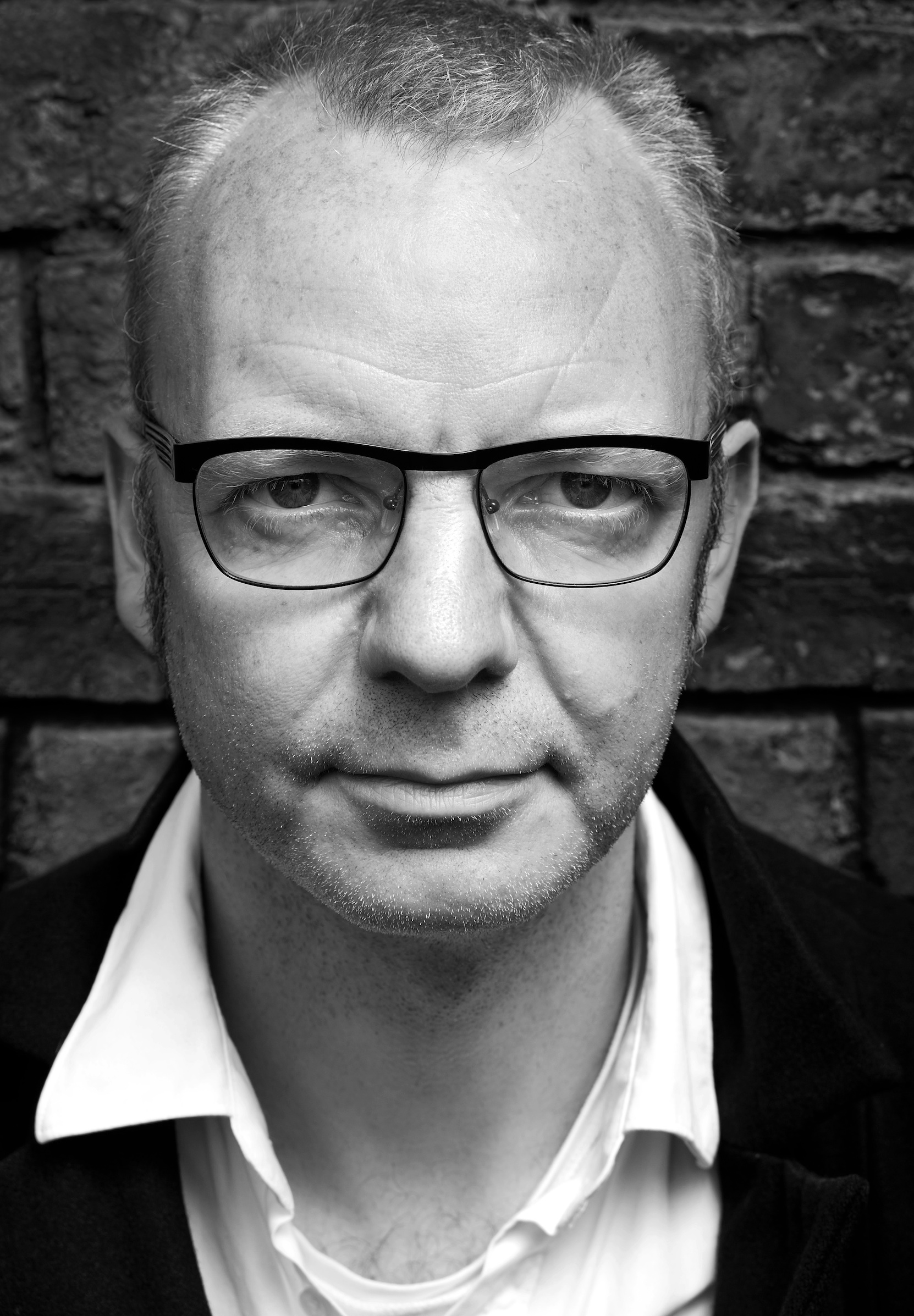 Geoff: So Carl, when did you get into art?

Carl: Well I got into art fairly early on, I wanted to grow up to be either a comic artist, an astronaut or a newsagent. I have been involved with one of these careers!

My start was a Foundation Course at Chesterfield College of Art followed by a graphic design degree at Leeds Poly in the ’80s.  Whilst still in Chesterfield I worked on a few music fanzines that not many people will have heard of, the likes of Junction 101, Crazed Culture, Toy Town Times and Hope!.

At Leeds Mike ‘Demolition’ Dunphy from CUD was on my course and Will Potter, CUD’s bass player, was one of my housemates. Early CUD rehearsals took place in the damp basement of our student house on Haddon Road in Burley! Peter Cattaneo, director of The Full Monty, was also on our course.

Geoff: Did you have any particular mentors?

Carl: Mr.Scothern, head of art at my old school Deincourt was very encouraging but he hated anything that looked vaguely comic-style – ‘boy’s own comics’ he called them! He didn’t like them. At all!

At Leeds Dennis Leigh (aka John Foxx from Ultravox – one of my musical idols since 1980) was a visiting tutor on the illustration course; he was really supportive and also a complete gentleman, a quiet man too. John Hyatt, vocalist in the Three Johns, was also a tutor of a crossover course focusing on the links between music and art; he was very good too: he had two pet axolotls!

Geoff: When do you show your work publically for the first time?

Carl: I exhibited some drawings and paintings, dinosaurs, sea birds etc., in the Arts and Crafts sections of local horticultural shows in the mid ’70s – won a few prizes! My mum won a number of trophies in the home-craft sections – that was for Victoria sponge, shortbread fingers, assorted fancies, scones, jam… possibly fruit cake.

Geoff: In your professional life, who are your artistic influences?

Carl: We always had the Daily Mirror at home and I remember liking Griffin’s caricatures. ‘Shiver and Shake’ was one of my favourite kids’ comics and my favourite artist in there was Ken Reid; he drew a series of back page monster pin-ups called ‘Creepy Creations’ – great work! American comics made a huge impression on me, especially Marvel comics, Jack Kirby, Steranko, Steve Ditko, John Buscema, Marie Severin- all fantastic artists. I still really love their work today. Basil Wolverton is great too – I saw his work on the bizarre covers of DC’s Plop comic in the ’70s. As a teenager I was an avid NME reader and cut out and kept the drawings of Serge Clerk, Ian Wright, Shaky Kane, Chris Long. Sadly I don’t have those scrapbooks any more.

From the non-comics and music world of art I like John Heartfield, George Grosz, Max Ernst – lots of striking, collagey stuff and lots of ugly stuff. I like Tracey Emin too although her work doesn’t have anything much in common with the others. I think they’re all about the ideas though!

Geoff: Do you admire any contemporaries?

Carl: In the ’90s I met and made friends with a number of other NME illustrators, including Simon Cooper, David Lyttleton, and JAKe. I liked their work and they always got their rounds in. From the comics world I like Michael Allred, Brendan McCarthy, Bruce Timm and more…

Geoff: What are you working on at the moment?

Carl: I’m about to start work on a book of science fiction-themed poems for kids, ‘It Came From Outer Space!’; it’s a sequel to the book ‘It’s Behind You!’ which I illustrated last year, a collection of monster poems by Paul Cookson and David Harmer.

I’d like to become more involved in animation and film though; we did a trailer for the ‘It’s Behind You!’ book and I think it came out pretty well (click here to see the trailer or here to see more of Carl’s work.. G Loop).

Geoff: Do you have a favourite piece of art?

Carl: The cover to Avengers 63 by Gene Colan, published in 1969 by Marvel Comics

Geoff: Did you enjoy working for the NME?

Carl: Sure, but it wasn’t how I thought it would be. It was a dream come true when I landed my first commission from Justin Langlands, who was NME art director at the time. I thought I’d made it and I was going to be a millionaire – and so soon after leaving college! I came to earth with a bump when I found out they paid £44.99 for an illustration so I had to hold off buying my Thame-side loft conversion apartment for a while. To make it worse I had to draw the Cult and I didn’t have anything in my head about the Cult, I didn’t even know if I liked them or not. I think ‘Spirit Walker’ was the only track I knew. Was that them?

Plus there was a ton of pressure that I put upon myself – it’s actually quite hard finally having to work for the magazine you’ve always wanted to work for. Subsequently I was disappointed with what I produced and never expected to hear from them again. I did though, the next one was the Cure and that was a lot more fun.

I’d also assumed that once you’re working for the NME you could get into virtually any gig for free. That wasn’t the case for freelance illustrators who rarely went into the office at Kings Reach Tower. I got invited to a couple of staff parties and quizzes but not much else. I don’t think I was pushy enough.

Throughout 1992 I illustrated the confusingly silly but strangely compelling ‘Thrills Believe It or Not’ feature in the NME’s intro section. The feature had already been running from time to time in the paper but I suggested illustrating it and they went along with it. I used to go in every month or so to go through ideas with writers Andrew Collins and Stuart Maconie – all good fun! There was talk of collecting the columns in a paperback book and there was publisher interest. Unfortunately it all coincided with a great upheaval at NME towers when editor Danny Kelly left and was replaced by Steve Sutherland from the dreaded Melody Maker. Andrew, Stuart and a bunch of other staff left the NME in protest and all went to work for EMAP’s Select magazine which was shaping up to be NME’s main competitor. I was sort of swept along with that exodus and I finished up illustrating Ian Harrison’s strip ‘Disco Inferno’ for Select.

Geoff: As you’ve mentioned a few bands, what other artists have you worked with?

Carl: Not many unfortunately. I did the sleeve for CUD’s HeyWire! single and bits of that were used on T-shirts and stuff. I also drew a Sugababes sleeve and poster! That was for the single ‘Angels With Dirty Faces’ – a slightly different style to my usual work. Although I’ve done lots of work about music and musicians it’s very rare that the record companies or the bands themselves approach me. I suppose it’s because I make everyone ugly (except for the Sugababes!).

Carl: I think that music-related art is struggling at the minute. The visual element isn’t as important as it used to be now that downloading is so common. When LP sleeves were twelve inch squares they were a fantastic platform for visuals, CD covers are okay but obviously they’re much smaller.

My favourite sleeve design is Man Machine by Kraftwerk. I’d never seen a sleeve like that before or heard music like that before. Kraftwerk made a huge impression on me. I still like them. I even like them live, even though they don’t do a lot. It’s great just to see them but it’s a shame the classic Man Machine line-up is no longer active.

Geoff: That’s Kraftwerk then (good choice by the way) but who else do you listen to?