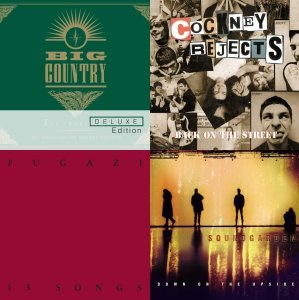 2. The Clash – Stay Free
The Clash were one of my first punk loves. I bought ‘Give ‘Em Enough Rope’ on the day it was released and rushed home to put it on the deck. The vinyl was so thin it was like a flexi-disc. I don’t think anyone would forget the first time they heard this beautiful song.

4. Husker Du – Too Much Spice
Reminds me of a stage of my life I’d rather forget about.

6. Soundgarden – Switch Opens
I went to see this lot again recently and even though the sound was crap they haven’t lost it at all.

7. Buffalo Tom – The Bible
I love it when Chris sings.

8. The Damned – Wait For The Blackout
The coolest punk bass line ever.

9. Bad Brains – Banned In D.C.
A friend of mine, that’s now sadly passed away, always used to say that this lot were the best hardcore band ever and the worst reggae band ever. Just check out the guitar solo on this.

11. Swervedriver – Sunset
I’ve seen this band in London, New York, Boston and countless other places and Jimmy’s guitar is always mesmerising! Played their debut album ‘Raise’ to death and the vinyl is especially thin on this track.

14. The Wrens – From His Lips
Saw this band over in L.A. in a small club on the east side and it was an unforgettable experience.

15. The Body Snatchers – Too Experienced.
The epitome of ska for me.

16. Firing Squad – Penetration
While all the other kids were getting down to the soundtrack from Grease on school bus trips I was on my own at the back listening to this on my trustee Waltham battery operated mono cassette player.

17. MC Rob Base & DJ EZ Rock – It Takes Two
Try not dancing to this when it comes on the jukebox down the local.

19. The Replacements – Unsatisfied
A desperate plea from probably the world’s greatest band ever.

20. Stealers Wheel – Stuck In The Middle
The first 7” I ever bought on from a car parts store on Albert Rd, Portsmouth for 15p. A university student we had staying with us said her boyfriend was in the band. I still have no idea if she was telling the truth.”

21. Black Sabbath – Spiral Architect
Proper metal from the gods of metal. Went to see them at Hammersmith Odeon in the 80s and the drum solo was seventeen minutes long followed by a fifteen minute Tony Iommi solo.

A fantastic and eclectic mix of hardcore, ska, pop, indie and hip hop – awesome! Thanks Gerry