It’s another proud day at 3 Loop towers as we announce the release of a 2CD expanded edition of Sebastopol Rd by the magnificent Mega City Four. The album will be released on 23rd September – click here to order your copy now.

The album, originally released in 1992, was their first on a major label having signed to Big Life/Phonogram following the success of Tranzphobia and Who Cares Wins. It is home to the Top 40 hits Stop and Shivering Sand, plus ever popular single Words That Say and Prague, covered by Muse in 2010 on their Resistance single as a tribute to the band who had influenced them.

This remastered re-issue has been compiled by the band with input from the Forward4Wiz trust, who receive a share of the profits on this release.

The 39 track, 2CD set includes 10 previously unreleased tracks including demos taken from the box loads of cassettes and DATs found in guitarist Gerry’s shed, and the digipack packaging includes a 16 page booklet packed with sleevenotes from the band, memorabilia and rare photos.

Alongside the release will be an exclusive Mega City Four hoody only available at 3 Loop Music’s store.
Or you can order the hoody and the album together and save a penny shy of a fiver.

About Sebastopol Rd, Bass player Gerry says: “Things were going well for the band in general before recording this, our third album. The title ‘Sebastopol Rd’ comes from the rehearsal studio in Aldershot where we rehearsed the songs for the album. After the album release things got very exciting. We toured at the biggest venues we’d done and sold out The Astoria in London, something we’d always wanted to do because we loved playing there so much. I think this album still stands up today and I’m proud to have been a part of it.” 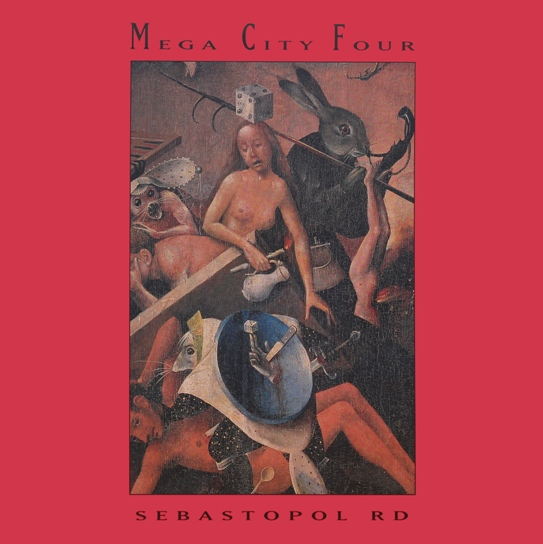